Civil servant, CBE (1955), distinguished calligrapher and pioneer of handwriting reform. In 1920 he studied lettering and illuminating under Graily Hewitt: under the patronage of St John Hornby he wrote the superb manuscripts of Ecclesiasticus, Horace and Virgil. He was a founder member of the SSI, serving variously as President, Hon Secretary and Treasurer. At the instance of Stanley Morison, he designed in 1928 the elegant compact typeface known as Narrow Bembo, a title he detested. He was closely associated with Edward Johnston and worked on a phonetic alphabet with Robert Bridges. During this time he anticpated the crisis in handwriting that was to hit classrooms after the war. Starting from a study of 16th-century writing masters (Tagliente and Lucas), he evolved a simple modern Italic, which was adopted in numerous schools. His Dryad Writing Cards, Handwriting Cards and Beacon Writing Books are now classics. In cooperation with manufacturer George Hughes, he devised the first italic pen nib. He founded the SIH in 1952. In 1976 his 70th birthday was celebrated with a festschrift Calligraphy and Paleography. (from Obituary The Scribe 25, A. S. Osley)

Margaret Alexander was born in Hampstead, England, in 1902. She studied at the Slade School of Fine Art and taught calligraphy and illuminating there, 1928-1957. She was also a calligrapher to the House of Lords, 1926-1963. She has executed addresses to a long list of distinguished persons, including four British sovereigns. Her commissioned works have been exhibited internationally, and are to be found in many of the great institutions in Britain, continental Europe and the United States, as well as in the finest private collections.

Henry James Manwaring, studied at the Central School of Arts & Crafts (possibly under Graily Hewitt but not confirmed); for many years he worked as a full-time freelance calligrapher from his studio in Charlotte Street, London W1, before relocating to his home; carried out a large number of commercial commissions for department stores Marshall & Snelgrove and Debenhams during the 30s and 40s. A very early member of the SSI, he was active in setting up the SSI's Travelling Exhibition, which lasted until the 1990s.

After an academic education she joined the Central School of Art to study calligraphy under Graily Hewitt whose work she admired. Here she became acquainted with Alfred Fairbank who became a lifelong friend. She contributed an article on Ink to The Calligrapher's Handbook, published 1956. She was modest and secretive about her private life. However it is known that her work at InterService Topographical Department, Naval Intelligence at the Admiralty during the Second World War involved her in the preparation of maps for use in the invasion. She had strong ties with France between the wars and for her post-war work involving the survivors and refugees of Dachau concentration camp she received a decoration from the French authorities. (obituary by Vera Ibbett, The Scribe 25)

Deputised as Hon Sec for Therese Fisher when the latter was ill. Member of the Royal Victoria Order.

First Chairman of the SSI in 1963. As well as the formal period as Hon Sec, 1950-53, in 1958 Heather Child took a year's additional responsibility as Hon Sec.Editor of some major works, including Formal Penmanship and Other Papers, written by Edward Johnston, The Calligrapher's Handbook, Lessons in Formal Writing and two editions of Calligraphy Today. She was a major contributor to More than Fine Writing, an examination of the work of Irene Wellington, along with Heather Collins, Ann Hechle and Donald Jackson. Received an MBE in 1974, for services to calligraphy and the crafts. Until 1997 she was a trustee of the Crafts Study Centre in Bath (later re-established in Farnham, Surrey), notable for its growing collection of twentieth-century lettering and calligraphy. She was a freelance calligrapher, book illustrator and writer. (contrib. S. Gunn)

She was initially self-taught but received formal training on the Roehampton Correspondence Course with Gaynor Goffe as her tutor, and on the SSI Associate Scheme (now the Advanced Training Scheme). Taught a variety of students from adult education through to ATS and Roehampton Correspondence students. Her work appears in several SSI journals, the SSI exhibition catalogue for ‘Fine Words, Fine Books’ and all later exhibitions. In 1996, she was appointed as an unofficial deputy to the Chairman. In later years she was appointed Chairman of the Education Board and Convenor of the ATS. She has run the SSI’s Correspondence Course with great success, and at time of writing she is re-structuring its content. She is the author of Contemporary Calligraphy, Robert Hale Ltd. 2011.

Teaching at West Dean. A scribe working on the St John's Bible. Sue stood in as Acting Hon Sec for January-October 2013. Sue graduated from Roehampton with the Diploma in Advanced Calligraphy, having already become a teacher, and was elected to Fellowship in 1987. She remains a teacher at all levels and was for many years an ATS tutor and co-wrote the SSI’s Calligraphy Correspondence Course. She was Editor of The Scribe for twelve years, managed the SSI Library, served several times on the Executive Committee and exhibited widely. She wrote Step by Step Calligraphy published by Weidenfeld and Nicholson in 1995. Her long-standing interest in using letters on and in textiles takes her into places most calligraphers would not imagine, and creates new insights into the nature of the craft. 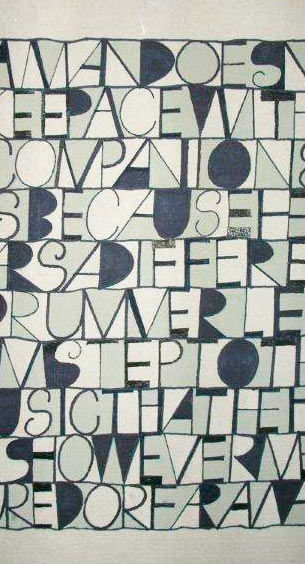