Saturday 5 October
at the Art Workers’ Guild, 6 Queen Square, London WC1N 3AT.
Lunch will be provided from 12:30. The short business meeting begins at 13:45, followed by a presentation. 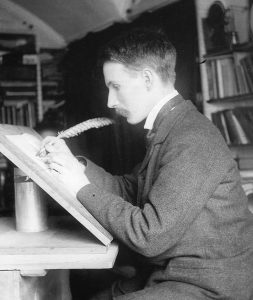 This year the speaker will be Andrew Johnston, grandson of the calligraphy master, Edward Johnston. He will tell about a particularly adventurous period of Edward Johnston’s life; Edward originally studied medicine in Edinburgh, but with little enthusiasm. In 1898 he moved to London and found his true vocation, devoting the rest of his life to rediscovering and teaching the forgotten art of medieval penmanship. Between leaving his old life and beginning the new, he made an epic train journey across America and Canada. His destination was Salt Spring Island in British Columbia, where he spent a month camping in the wild. It was an exciting time to visit the New World. On the East Coast, he saw modern America, with its electric lighting, streetcars and banner headlines celebrating victories in the Spanish American war. On the West Coast, he saw the last days of the Old West, as the Klondike Gold Rush reached its height. He recorded his impressions in a series of illustrated letters to his aunt in Scotland and these form the basis of the talk by his grandson.