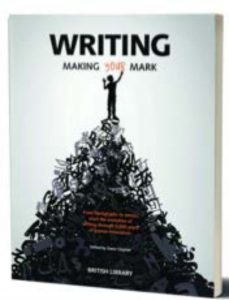 Ewan Clayton gave a marvellously informative talk after the business part of the AGM meeting on 10 October. He spoke about the development of writing over 5000 years and specifically about the exhibition curated by the British Library in the summer of 2019, called Writing: Making Your Mark.

The exhibition was three years in the planning and was originally proposed by the Library because of the huge change in the story of writing over the last 50 years, due in large part to computers evolving from being calculating machines to be writing machines, and thus used for communication of all sorts. Ewan pointed out, for example, that in a 60 second timeframe, 187 million emails are sent worldwide.

Ewan became involved because of his book, The Golden Thread, which tells the history of writing. The Library has many curators whose expertise lies in different, rather narrow, areas and Ewan was asked to act as academic expert to help bring these curators together to tell a compelling story. The limit of 70 words for each exhibit’s label focused the mind for these curator-storytellers, who also had to keep in mind that they were communicating with the general public.

The main aim of the exhibition was to show that writing is shifting and changing as technologies develop. The exhibition made clear that we’re not all living in a totally technological world and that handwriting and calligraphy are not going to disappear, though shifts and changes will happen over time, and that human beings and the different cultures that we live in are very much part of the whole picture.

There was room for only 120 objects in the exhibition though the exhibition team started with over 400 which had gradually to be whittled down to the number that could be accommodated. The Library borrowed some materials from the British Museum, a process that introduced costs and paperwork such that in the end the exhibition team were only able to borrow twelve objects from outside the Library. Nonetheless,
the Library had plenty of material from which to select objects for display.

One of the main themes of the exhibition was the Origins of Writing. Ewan led us through the possible places of origin of writing and writing systems – Babylon and Assyria, Egypt, India (developing the Indus River Valley Civilisation script), China, Meso-America and possibly Easter Island. Because the Indus River Valley script and the Easter Island script have not been decoded, the exhibition focused on the other four locations.

Ewan described the development of our known alphabets (with the exception of the Korean Hangul alphabet, which was created by King Sejong in the 1400s) from the original primitive Egyptian proto-Sinaitic script, exemplified by a magnificent Egyptian stele from about 1600 BCE (the oldest object in the British Library). Building on the origins of writing, the exhibition went on to explore stylistic variations, focusing heavily on Roman script because of the rich collection the British Library has of Roman alphabet material. Examples of Italic and Carolingian scripts were displayed, for instance, along with of early printed volumes in such scripts (these were hand-illuminated). Ewan also encouraged us to think about the ways in which writing and speech are complementary, or do the same job, or do completely different things. It is clear that writing cannot record many aspects of speech, such as intonation, gesture or even volume, though it can do things that speech cannot, such as organising and arranging large volumes of complex information so that sense can quickly be derived from them.

A further main theme was Tools and Materials. A number of objects were on display under this heading, including stone carving tools, quill pens and metal nibs. Interestingly, because the Library houses copies of all patents filed in the UK it has patents for early pens, including one by a certain Mr Gillot. Also on display was an early Biro, examples of paper and vellum, and more modern machines such as an extraordinary Chinese typewriter from the 1970s and an Apple II computer.

The exhibition also acknowledged the importance of Human Communities in the development of writing, defining them largely by the way they use writing – learners, students, note-takers and so on. In this section were such varied examples as Mozart’s notebook, Alexander Fleming’s laboratory notes and examples of early shorthand.

Sitting alongside the magnificent Ramsay Psalter in the same case was Donald Jackson’s splendid charter for the Crafts Council. Ewan said that Donald was thrilled with this juxtaposition! In complete contrast, also on exhibit was an exquisite album of Japanese texts written by a Japanese Emperor and Empress, both born in 701. Overall, the range and variety of the exhibits were stunning.

Finally in terms of themes, the exhibition explored the issue of how Politics influences scripts: these can change – or be changed – for political reasons (e.g. the adoption of a new script in Turkey under Ataturk), or people can invent their own scripts for changed circumstances.

Alongside the main stories, the team also had to think about children visiting the exhibition and a children’s trail was created showing items such as medieval manuscripts with appealing border illustrations. There had to be something for everyone.

This was a real treat of a presentation by Ewan, so rich in content and delivered with his usual charm and flair. He finished by saying that the exhibition is probably going to China, for which it will have to be re-shaped to make sense to that different audience. No doubt Ewan’s expertise will prove invaluable once more.

Ewan Clayton was awarded an MBE in 2014 for work with various charities affiliated
with writing and calligraphy. Ewan is Professor of Design at Sunderland University, an
artist, writer and speaker. He was trained in calligraphy at Roehampton Institute.