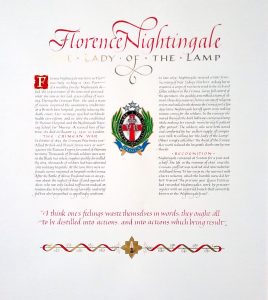 Lay Members Day 2019 on Saturday 11th May was held at a new venue, Kings College on The Strand. The event attracted around 200 delegates who were treated to a broad range of calligraphic events throughout the day. As well as many SSI Lay Members and Fellows, there were an increasing number of external visitors, which is a very positive development. 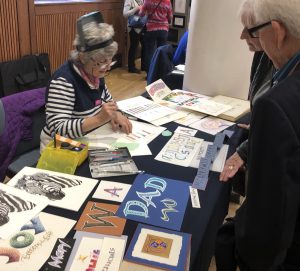 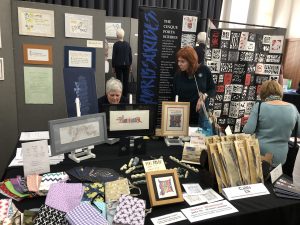 In addition, there were two regional Groups, Cinque Ports Scribes and Gloucester Lettering Arts, East Surrey College showing works of Heraldry and Illumination, the Society of Italic Handwriting and the popular suppliers Scribblers and Friends of Bangladesh.

Following feedback from previous years, the commentary and the Daubney Lecture were separated, which meant the comfortable lecture theatre could be used twice. The annual LMD Exhibition received over 30 entries and produced a wonderful display of work. The engaging exhibition commentary was given by Sylvie Gokulsing FSSI. Winners of the vote for favourite pieces were Alma Swan, Attilio Medda, Cynthea Rhodes and Gordon Godenho. 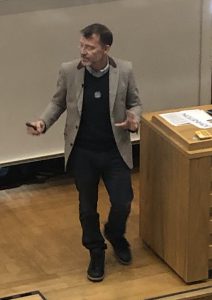 The main afternoon event was the Daubney Lecture by design historian and television presenter Mark Ovenden who gave a fascinating talk about the development of the Lettering used in London Transport by Edward Johnston and Eric Gill, and its impact upon Typography today. The lecture was supplemented by a display of work by Johnston and Gill from the SSI Archives.

We are already planning next years event which will take place on Saturday 16th May 2020 at the same venue. The overall opinion was that this was a great venue with a lot to see and do. Suggestions about facilities issues such as a seating area for lunchtime will be addressed for next year’s event, and thanks to everyone who gave such positive feedback.

From next year, Lay Members’ Day is being rebranded as CAPITAL LETTERS. Find out more…